Linear regression is an ML discipline, where one or more input features are mapped to a continuous output variable. A linear regression model is essentially a mathematical function that is learned from known data that maps input features to output labels, known as training data, which can then be used to predict output labels for new data. The learning algorithm looks at the training data set and learns the intercept and coefficients for the mathematical function.

An example for this is trying to predict house price based on information known about a house like the living area, the number of bedrooms, the number of floors, whether new or not etc. To be able to predict sale price, the ML algorithm looks at existing sales data, where both the attributes of the sold houses and the selling prices are known, to learn a model that maps the features to a price. This model can then be used to predict prices for houses newly coming on to the market.

Here ϴ0 is the intercept and ϴ1 through to ϴn are coefficients for each of the input features. If there are m samples in the training set, X is essentially a matrix of m x n + 1 dimension and ϴ is a column vector of size n + 1. So H(ϴ) is a matrix product of X and ϴ. So the objective of the learning algorithm is to learn the values of ϴ, based on the training data, that will fit well on the training data and generalize well for new data that is unknown.

Linear regression learns the coefficients is using something called a cost function. The cost function essentially operates on the deviation between the predicted values and actual values within the training set. 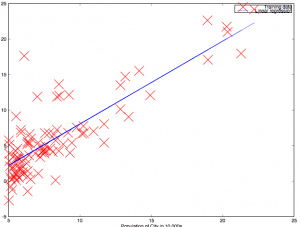 Leser the value of the cost function, better is the fit of the model to the training data. The objective of the learning exercise is to compute the values of ϴ that minimizes the value of J(ϴ). 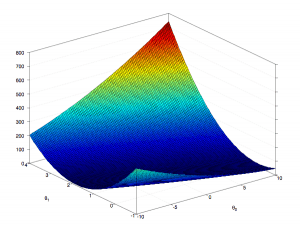 If we take the 3D plot above and create a contour plot, the optimal value of ϴ0 and ϴ1, to get the minimum value of the cost function will correspond to the middle of the innermost ellipses. 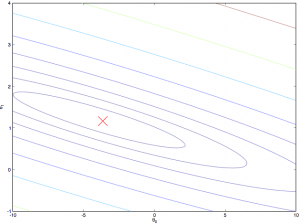 Gradient descent is an algorithm where we start with initial value(s) of ϴ, and go through a number of iterations, descending the gradient of the convex function, by adjusting the values of ϴ by a factor known as a learning rate, till the iterations converge, where the changes in J(ϴ) becomes less than an arbitrarily defined minimum value. Alternatively, you can keep adjusting the values of ϴ for a fixed set of iterations.

The partial derivative of the cost function with regards to ϴ1, which is the coefficient of the input feature x1, will be.

So, the gradient descent algorithm will in each iteration update ϴ as follows

Now we will have a look at implementing gradient descent using simple Scala code. I have a dataset for a chain store that maps population in a given city to the profit that is made in that city, as a two-column CSV file. The snippet below reads the raw data from the file and maps each line to a three element tuple, the first element being a constant 1 corresponding to the intercept, the second being the input feature and the third being the output label.

Now we define the function that implements the gradient descent logic.

Rather than applying an iterative logic, we can use linear algebra to define a normal equation to solve the optimal values of ϴ, as we know at the point of the minimal value of the cost function, the gradient with respect to each ϴ, and consequentially the partial derivative is zero. We will look into this in detail in the next post.

Some of our
Clients